How to convert FLV to iPad on your Mac?

FLV (Flash Video) is a container file format used to deliver video over the Internet using Adobe Flash Player. FLV is not a video type supported on iPhone, iPod, iPad or iPad 2. Flash Video is viewable on most operating systems except Apple iOS, via the Adobe Flash Player and web browser plugin or one of several third-party programs. In order to view Flash FLV Videos on iPad, you will need to download a FLV to iPad Converter. This tutorial shows how to convert FLV to iPad video on Mac with Socusoft iPad video converter.

For Windows users, please refer to How to convert FLV to iPad video?

Run Socusoft DVD to iPad Converter, click the “Add Files” button to import FLV files saved or downloaded on to your Mac HD. 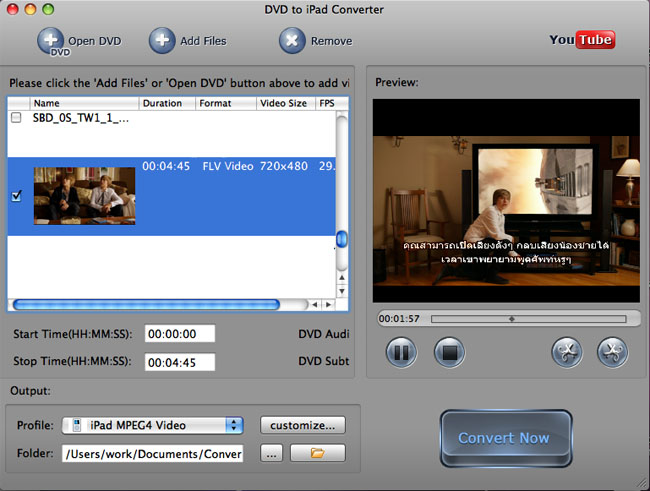 This iPad video tool sets default output profile to iPad MPEG4 Video, thus you do not need to change the settings for your iPad except you want to convert videos for other devices such as iPhone, BlackBerry, PSP, mobile phones, etc.

Click “Convert Now” to start the conversion on your Mac OS X.