Tag Archive for 3gp to ipad

How to Convert 3GP to iPad on Mac?

3GP multimedia file is the audio and video container format developed by the 3rd Generation Partnership Project (3GPP). It is specially designed for 3G cell phones and over the Internet. You may find it commonly used by mobile phones. iPad and iPad 2 do not support .3GP files. To put 3gp to iPad, you will need video converters such as Sosusoft DVD to iPad Converter. At this time most mobile phone may be capable of playing back 3GP video files. On your computer, you can use following programs to open 3GP files such as RealNetworks RealPlayer, Apple QuickTime, MPlayer, Media Player Classic, etc.

For Windows users, please refer to: How to Convert 3GP to iPad?

How to Convert 3GP to iPad Video with DVD to iPad Converter?

Run Socusoft DVD to iPad Converter, click “Add Files” button to import the 3GP files from your Mac HD to the video converter. 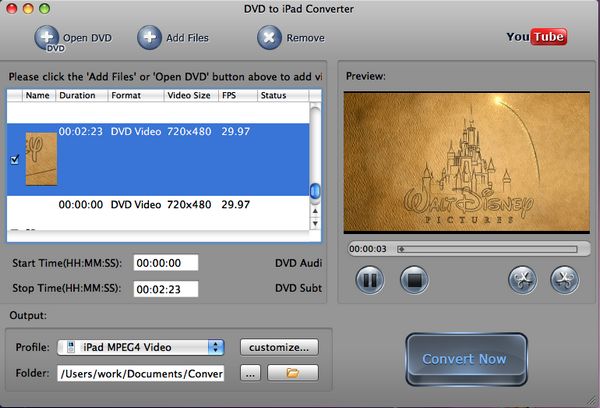 This step is optional as iPad MPEG-4 Movie (*.mp4) is set as the default output video type.

See : How to Sync Video to iPad with iTunes?

Related Tutorials:
How to Convert DVD to MP4 Videos?
How to convert FLV to iPad on your Mac?